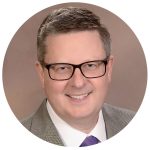 Scott McKenzie has ministered through First Baptist Lafayette, Louisiana, since June 1, 2008, and as the Minister of Education since January 1, 2018. He is the primary minister to adults, and supervises Preschool and Children’s Ministries. Responsibilities include the Sunday School and Discipleship organizations, First Baptist Christian School Advisory Board and the Coffee Shop.

Originally from Chickasha, Oklahoma, Scott is a graduate of Eastwood High School in El Paso, TX. He holds a B.B.A. in Management from the University of Texas at El Paso and a M.A.C.E. in Church Growth from New Orleans Baptist Theological Seminary. He is married to Andrea Poche’, M.A.C.E. from NOBTS, and they have two daughters. Scott has also worked in the hospitality and retail industries, but has a desire to make a significant difference through the local church for the kingdom’s sake. Previous ministry roles in Texas and Louisiana include Youth Minister, Executive Pastor, Minister of Education and Administration, and Minister to Senior Adults and Single Adults. He enjoys working Sunday School because Sunday School works!

You must create a free profile to contact this member!